Cars to Release in June 2022: As the year 2022 begins and ends 5 months later, this month of June will be significant for the Indian automobile industry. June is set to launch an unprecedented number of new cars this year. Here is the list of cars to be launched in the country in June 2022.

Cars to Release in June 2022 in India

After the global launch in March, the Volkswagen Virtus will be launched in the second week of June. The Volkswagen Virtus is the successor to the Vento and will be launched in India on June 9. Volkswagen is expected to offer its Virtus in two trims, the Dynamic Line and the Performance Line, which will get the 113bhp, 1-litre TSI variants, and the 148bhp, 1.5-litre turbo petrol engine packing 250 Nm of peak torque.

Touted as the “Big Daddy of SUVs”, Mahindra & Mahindra will launch the Scorpio-N on June 27. After the Hindra XUV700, the 2022 Scorpio-N will be the second vehicle to get the new Mahindra logo. Mahindra has officially confirmed in a press release that the all-new Scorpio-N will get 4X4 functionality as an option. The Scorpio-N is likely to come with the same 2.0-liter turbo-petrol and 2.2-liter diesel engines as the XUV700. It comes with an 8-inch infotainment screen, dual-zone climate control, flat-bottom steering wheel, sunroof, and more.

The bookings for this all-new electric car from Kia started on May 26 and will be launched on June 2. Only 100 units of the car are planned to be imported into India. The Kia EV6 will be available only in 12 locations in India. These include cities including Delhi, Mumbai, Pune, Ahmedabad, Gurugram, Noida, Jaipur, Chennai, Bengaluru, Kochi, Hyderabad, and Kolkata. The rear-wheel-drive variant of the Kia EV6 has a 77.4kWh battery pack with a range of 528 km (about 528 km on a single charge). 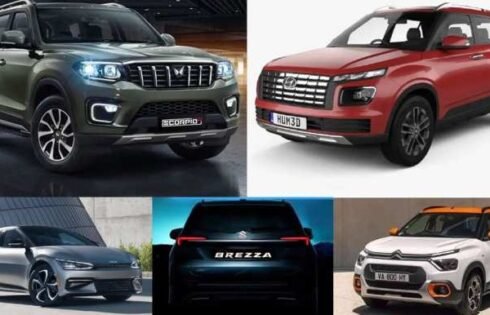 Hyundai is currently in the process of introducing a mid-life facelift for the Venue sub-compact SUV. It is expected to be launched in the country this month itself. It will feature several styling updates including a new front grille and updated headlights, a new alloy wheel design, and new wraparound LED tail lights. The 1.2-litre NA petrol, 1.0-litre turbo petrol, and 1.5-liter diesel engines remain unchanged. The 2022 Hyundai Venue is priced at Rs. 8 lakhs (ex-showroom) onwards.

One of the best-selling sub-compact SUVs in India, the Vitara Brezza is all set to get a generational update. Maruti Suzuki has decided to drop ‘Vitara’ from the car name. Apart from the name, the exterior design and cabin of the SUV will be new. It is also the first Maruti car to be offered with an electric sunroof.

Toyota SUV: Toyota is set to enter the mid-size SUV segment to compete with the likes of Hyundai Creta, Kia Seltos, Skoda Kushaq, and Volkswagen Taigun. Reports suggest that the soon-to-be-launched Toyota SUV will use a self-charging hybrid system similar to the one recently seen in the Honda City E: HEV Hybrid.

The SEO industry is one of the most dynamic sectors of our time. It is also one of the fastest growing. We are constantly on the lookout for talented individuals who wish to take their skills and knowledge to the next level. With my vast experience as an SEO consultant, I can provide top-notch SEO services, including Onsite and Offsite SEO. This allows me to improve your SEO efforts, helping your site rank higher in search engines and get more organic traffic